BVZ Berliner Zeitungsdruck brings platemaking up to date with Kodak

– Still a believer in thermal imaging, BVZ Berliner Zeitungsdruck GmbH (www.berliner-zeitungsdruck.de) decided to invest in its future in May this year, when the company started producing plates with three KODAK GENERATION NEWS Platesetters integrated in a press configuration for fully automatic newspaper platemaking. Kodak’s ability to supply the complete plate lines and the NELA plate handling technology played a key role in the company’s investment decision. It was also hoped that the upgrade to KODAK Technology would iron out previous reliability and control problems experienced by BVZ Berliner Zeitungsdruck GmbH. Like the parent company Berliner Verlag, which is responsible for the Berliner Zeitung and Berliner Kurier – as well as the weekly ad journal Berliner Abendblatt through a publishing subsidiary – this printing house is owned by the M. DuMont Schauberg media group in Cologne, Germany.

The new CTP systems replaced three flatbed thermal platesetters that had been doing duty ever since 2002 / 2003. "It was high time for a new investment," says Steffen Helmschrott, BVZ's Managing Director. "The old CTP machines were getting increasingly unreliable, and we would no longer have been able to meet our plate production needs with them in the long run. What's more, we were experiencing a growing number of problems trying to control the platesetters via interfaces for which there was no longer any proper documentation and no more hardware parts were available." 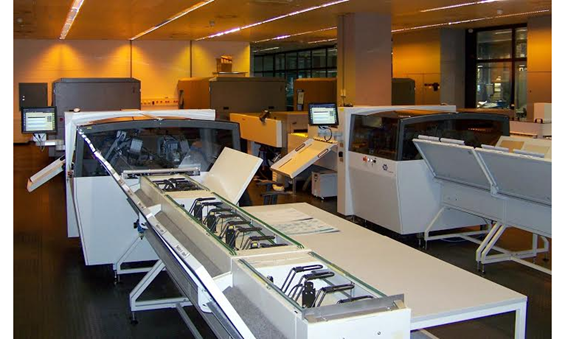 Two of the newly installed KODAK GENERATION NEWS Platesetters provide an hourly throughput of 200 plates while the third delivers up to 250 plates an hour. Each of these automatic CTP systems can hold as many as 1600 plates in four bays each for the fully automated loading and imaging processes, so that long, uninterrupted productive phases are now a reality. Each Generation News Platesetter is supported by a downstream Kodak Mercury P-HD 850 Plate Processor. Kodak also supplied the NELA plate handling technology – consisting of a plate rotator table, punch and bending units, and a plate stacker – as general contractor.

Thanks to this modern platemaking technology, the printing house is optimally equipped to meet today's production requirements – and that includes backups. Between 1000 and 1500 plates are consumed every day, and at peak evening times the prepress department has to deliver as many as 350 an hour. The company prints on a web offset press designed for Rhenish format with four-high towers, four press sections, and four folders. In addition to the two dailies (Berliner Zeitung and Berliner Kurier with a circulation of 150,000 and 120,000 respectively), BVZ also prints the weekly Berliner Abendblatt (1.3 million copies) as well as Der Freitag and Jüdische Allgemeine (both weekly newspapers) and more than fifty other periodical products.

The performance of the KODAK THERMALNEWS PT Digital Plates played a key role in the investment decision. For the majority of the print jobs, this innovative negative-working thermal plate is used without the preheat step, achieving 200,000 impressions on press, whilst saving substantial amounts of energy. For the longer runs, the preheat is used, enabling the plate to reach an incredible 350,000 impressions.

"We also tested violet plates upfront of our decision and compared their on-press performance with that of thermal. The conclusion we came to was that violet plates achieve roughly the same run lengths on our web press as the ThermalNews PT Plate without the preheat step. Unfortunately, that's not enough for high-volume products like our ad journal or promotional products," the Managing Director explains. "The stable tonal reproduction, the plate's ability to withstand the mechanical and chemical stresses occurring in the press – essential to achieve such a high number of impressions – and its excellent ease of handling are other important arguments in favor of thermal. Whichever way you look at it, thermal plates still have a clear edge here."

"In our experience the ThermalNews PT Plate can only be described as a very stable plate. We manage all our typical newspaper jobs without the preheat. Whenever we need to print very long runs, we switch it back on. Everything runs without a hitch – and also slightly faster and more conveniently since we bought our new Generation News Platesetters," Helmschrott confirms.