With its customary focus on high performance presses, Nilpeter showcased its Indian top-seller: The FB-3300S. The 8-colour servo flexo press with short web path featured a gravure unit built at the Nilpeter India factory in Chennai. Andy Thomas stopped by the Nilpeter stand. “This unit is very big news for the show”, the Tarsus group editor concluded. 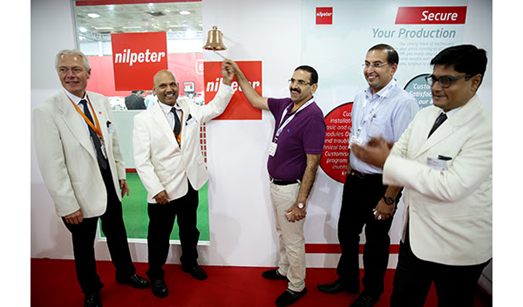 Mr. Rajiv Manchanda of Homemade Bakers rings the bell for his second FB-3300S at LabelExpo India 2014.

The value-adding gravure unit printed a white as the first down on a metallic beer label. “Gravure has come into the Indian market in a big way in the latest six months. Converters have started using gravure for metallic decoration, special coatings, and whites”, says Sales Manager Manish Kapoor.
The press was also equipped with Corona treater, web cleaner, chill drums on all units, and a 100% print defect inspection system. The servo function covers all operations from tension-setting of roll to supplying power to the printing units, and enables the press to operate at a speed of 225 meters a minute.

Nipeter India sold its first press in 2009 - delivered in 2010. Nilpeter assembles ten presses each year at its Chennai plant, and has over thirty FB-3300 presses installed in India. “In the last two years, Nilpeter has been the most successful global press manufacturer in India”, says Manish Kapoor. ”The footprint we have made is very decent, and we are confident that we will make more installations than our competitors this year”, Kapoor concludes.