In terms of profitability, 2014 has been a successful year for GIDUE Technology, especially in the Turkish market.

Thanks to the great cooperation of its Turkish certified distributor IMEX Group, GIDUE is proud to announce that in the last few months several GIDUE MX printing machines have been installed to some important converters in Turkey.

Among them it is important to highlight Yeniler Etiket. Founded in 2004, Yeniler Etiket is a Turkish converter, based in Istanbul, that is specialized in the production of thermal and logistic labels. The cooperation with GIDUE started in spring 2013 during Printtek Expo, when they decided to purchase their first GIDUE UV Flexo press: a MX 370 mm width, 8 colors and 1 die-cutting station, that was the one exhibited at GIDUE booth.  Following the successful results achieved with the first installation, Mr. Mehmet Akdag, Owner and Director of the company, decided to keep on investing on GIDUE technology and after less then 6 months he installed the second GIDUE press, an MX2 370 mm width, 8 UV Flexo colors and 2 die-cutting stations.

“We bought the first MX during the exhibition in Istanbul and we were so happy of this investment, that in 6 months time we decided to buy another GIDUE press. With the growing demand of the Market for high quality labels, it is necessary to operate with advanced systems and GIDUE technology is exactly what we were looking for. ” commented Mr. Mehmet Akdag, Director of Yeniler Etiket.

The resounding success of GIDUE technology has spread across Turkey and after the first installation to Yeniler Etiket, 2 other GIDUE MX UV Flexo presses 370mm , 8 colors and 1 die-cutting station, have been purchased and installed to 2 other big Turkish converters: Etimag and Tanitim Etiket.

Lead by Mr. Oguz Okur, Etimag is a big converter based in Istanbul that has been operating in the Labels and Packaging Industry since 1998 and that is specialized in the production of Shrinkable Sleeves and Pharma Labels. Etimag’s mission is all along focused on the complete satisfaction of customers needs through the use of the latest high-technologies available on the market and the help of a pool of dedicated experts.

“We saw GIDUE presses in a famous Print House in Istanbul and we were immediately surprised by its performances and the ease of the operations. We have therefor decided to add it in our machinery inventory and today I can say that we are more then satisfied with this investment.” quoted Mr. Oguz Okur, Director of Etimag.

Tanitim Etiket is another example of converter that, after the great impact of GIDUE MX press on the Turkish market, has decided to invest on GIDUE Technology.  As it was for the first two companies here mentioned, also Tanitim Etiket is based in Istanbul and it is one of the major converters in the Turkish overview. It has been founded in 1980 by Mr. Taner Sansal and it is specialized in the production of Cosmetics and Food Labels.

“The cooperation with GIDUE distributor IMEX Group started several years ago and we have always been such satisfied with every investment, that when we decided to buy our first UV Flexo press, we had no doubt about where to go. GIDUE MX press is really the ultimate solution for every converter that wants high quality in printing with a moderate price.” affirmed Mr.  Taner Sansal, Director of Tanitim Etiket.

Since its launch in June 2012, more than fifty MX presses have been installed worldwide. MX presses makes GIDUE technology available to a large number of converters who need top print quality, or would like to change from letterpress to UV-Flexo, at an affordable investment level.  An 8 colors MX UV Flexo press, entirely loaded with GIDUE quality, is the best possible option today available in the market.

Cristina Toffolo, GIDUE Vice President Marketing concluded: “Turkey is an attractive market in which to deal with a large rate of expansion. Its growth in the packaging industry is becoming a leading reference in Europe by showing signs of modernization typically Western. GIDUE provides a wide range of solutions for the Labels and Packaging industry: Digital Automation, Tension and temperature control, multi-process and added value converting, it offers exclusive solutions and best value for quality and innovation in the Turkish market. 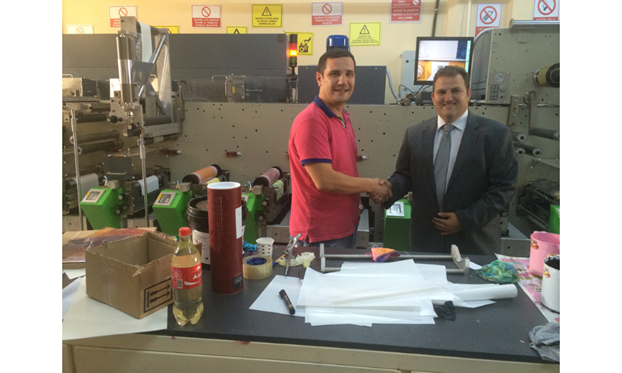