Posters through the ages in the hubergroup calendar 2015

To honour the printing-ink manufacturer's 250th anniversary, the hubergroup used a sophisticated, graphic advertising medium: the poster Kirchheim near München, 16 December 2014 – Twelve different posters that reflect both the historical changes and significant aspects of the hubergroup's 250-year-old heritage have been selected as the motifs for next year's wall calendar. The calendar kicks off with a January motif that takes us back to 1750, with a coloured copperplate engraving depicting the indigo extraction process, and closes out the year with a contemporary, award-winning poster created to advertise a US arts festival.

The success of posters as information media used both by businesses and institutions to "speak" to the general public began in the 18th century. Alois Senefelder's invention of lithography enabled the simple reproduction of coloured prints and this quickly led to the demise of the cheap and very basic bills of old and the dawn of posters, often of high artistic quality. As advertising became an increasingly important factor in the mass society of the 20th century, advertising specialists adopted this new medium and graphic designers focused more and more on achieving maximum promotional effectiveness.

Almost all of the 15,500 copies of this calendar have already been distributed to all four corners of the earth. 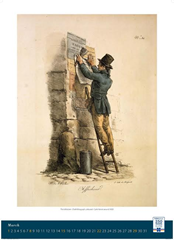 The coloured chalk lithograph by Carle Vernet, entitled "The billsticker" and dating from around 1820, is the motif for March 2015