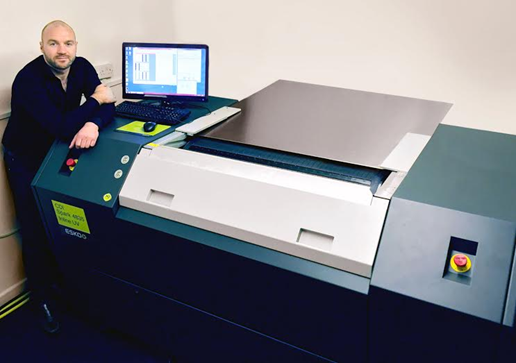 “UK operations are under increasing pressure to provide an all-round, high quality, cost effective, range of services that touch on numerous production sectors,” explains Paul Bates, Esko Regional Business Manager. “But crucial to that is job flexibility, particularly with run lengths. This is where Esko’s Full HD Flexo becomes a critical tool in any solutions portfolio. The ability to provide what specifiers are demanding to ever tighter budgets enables our customers to be highly responsive to ever-changing market requirements.”

JFM Plates adopted Esko Full HD Flexo to stay ahead of the curve and it was the first UK company to achieve Full HD Flexo Certification. Mark McKee, General Manager of the Manchester firm explains: “There were a couple of instances where we had been approached by potential customers and had not been able to quote because we couldn’t fully meet the requirements. We had to do something about it. Now with Esko Full HD Flexo, we can grow the business, safeguard our future and work with a greater number of partners.”

Celebrating its 35th year in operation as a reprographic specialist, JFM Plates was established by Mark’s father John to serve the lithographic market. After 15 years demand fell as operations began installing their own solutions. This prompted a move to flexo followed ten years later by investment in digital and its first Esko CDI Spark 2530. Three years later a larger CDI Spark 4835 was added. Last year the latest investment was made in another CDI Spark 4835 with high resolution optics of 4,000dpi and inline UV to enable the adoption of Full HD Flexo. Full HD Flexo Certification was completed in March and that has excited our customers as to the enhanced results we can now deliver states Mr McKee.

“We had been running a stochastic screen set on our standard imagers,” he explains. “Other operations have been using Esko HD Flexo for a few years. We looked at that but decided we wanted to leapfrog the standard technology and go one step beyond. We considered other processing methods but felt UV inline was the cleanest and the most controlled way without adding another step such as lamination of the plate. Also, because we had existing Esko solutions, it made it easier to dovetail – installation was nice and seamless. Now we can really push the boundaries beyond anything we have been able to do before.”

Cost effectiveness on a plate

In addition to Esko Full HD Flexo, JFM Plates works with Equinox to help its customers produce work more cost efficiently. Equinox standardises printing production on a standard set of inks. This can result in a reduction in the number of plates required as printers might not have to rely on a larger set of spot colour inks for each and every job. Equinox allows increased press productivity while reducing ink costs. Because they always use the same set of inks, they can gang jobs together, thus making the use of plates more cost effective. The software enhances quality and consistency, complements the Esko Full HD Flexo platemaking process and is cost efficient without compromising colour accuracy.

The firm is upgrading to Esko Automation Engine 14 as well, and creates and shares files with strategic partners such a Reprobrand in Scotland via WebCenter. Mr McKee adds: “Coupled with Equinox, we are able to achieve stunning results. And customers are saving on the press costs as a result of reduced make-ready times and ink consumption. Esko Full HD Flexo has given us a big injection and next year we will continue to expand and grow as we find new ways to add value to our services. The solution with Equinox is opening up doors for us and that is not something that we would have been able to do before.”

Bristol operation Phoenix Printing Plates runs three digital imaging systems, of which two Esko 5080 CDI Sparks, along with Esko colour management and ArtPro packaging prepress software. “We immediately saw a 15% growth in business when we started a trial with Esko Full HD Flexo,” comments Steve Collins, Sales Director at Phoenix Printing Plates. “We felt that going Full HD Flexo would make us faster, and the printers we make the plates for stated the quality is so much better. The speed, the no compromise on quality and the improvements to the production process are all making a big difference.”

He continues: “We are getting much nearer the quality of gravure and offset customers are demanding. Initially customer interest was piqued by the use of the buzzwords but the results soon swayed their decision,” states Collins. “Next to quality improvements, Esko Full HD Flexo enables customers to enjoy lower volume cost of flexo compared to gravure. The industry doesn’t move fast but it wouldn’t surprise me if we didn’t have another CDI Spark in the long run.”

“Because the Full HD Flexo dot shape is unique, it delivers a superior flexo plate that details the highlight, shadow and solid areas of a print job,” concludes Mr Bates. “Aside from the superior quality and consistency, the assurance of sharp text and brilliant image and the fact there is no need for compromise sets new production standards. These companies have seen the capabilities for themselves and are now enjoying the business improving benefits they bring. It is these benefits that ensure market leading technology Esko Full HD Flexo and Esko Equinox continue to garner industry recognition and accolades including 2014 Printing Industries of America InterTech™ Technology Awards. Customers also continue to collect their own awards: Marvaco, as well as PPP, an EFIA Print Award, Uniflex a FlexoTech Award and Bischof and Klein and Glatz Klischee, DFTA Awards, Marvaco was also a “Best In Show” at the 2014 FTA Excellence in Flexography Awards along with RockTenn, Cellotape-Landmark and Lewisburg Container Co.”