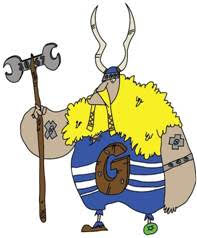 The 2015 FIRST Robotics Competition (FRC) season has begun and the Geneva High School Robovikes, sponsored by The Label Printers, are back for their seventh season. Earlier this month, nearly 75,000 high-school students on approximately 3,000 teams at 107 venues around the globe joined the 2015 Kickoff via live Comcast NBCUniversal broadcast.

FIRST explains, “At today’s Kickoff, FIRST Robotics Competition teams were shown the RECYCLE RUSH playing field and received a Kit of Parts made up of motors, batteries, a control system, a PC, and a mix of automation components worth tens of thousands of dollars – and only limited instructions. Working with adult Mentors, students have six weeks to design, build, program, and test their robots to meet the season’s engineering challenge. Once these young inventors build a robot, their teams will participate in one or more of the 105 Regional and District events that measure the effectiveness of each robot, the power of collaboration, and the determination of students.”

That six week time frame is a significant commitment of time and effort, which this experienced Robovikes team understands very well.  Geneva High School’s team meets on Mondays and Fridays after school for about two to three hours, and then for about nine hours on Saturdays.  And usually even more time as the competition nears.

RECYCLE RUSHSM is, as FIRST explains, “a recycling-themed game played by two Alliances of three robots each. Robots score points by stacking totes on scoring platforms, capping those stacks with recycling containers, and properly disposing of pool noodles, representing litter. In keeping with the recycling theme of the game, all game pieces used are reusable or recyclable by teams in their home locations or by FIRST® at the end of the season.” View the game animation and more on FIRST’s YouTube Channel: https://www.youtube.com/user/FRCTeamsGlobal

This past Saturday found the Robovikes working on assembly of this year’s ‘bot, exercising the “platform”, creating a new team web site, programming, watching, talking, laughing – pretty much everything you’d expect from a group of teenagers and their adult mentors. Now in the team’s seventh season there are a lot of veterans around the room, but also a lot of kids who have joined because their friends and families told them how much fun it is and/or because of the success that the team has enjoyed since its rookie season. And their reputation for success which comes from hard work, skill and fun is beginning to define the program.

Mary Keyzer, a teacher at Geneva High School and the Robovikes coach, and two other principal adult mentors have volunteered countless hours working with the team since the beginning – Kevin Keyzer, a ceramics engineer and Mary’s husband, and Joe Kane, who is the Director of Research and Development at The Label Printers.  On this Saturday, at the team meeting being held at the high school, Kevin Keyzer is joined by other mentors – his dad, John Keyzer, Tom Paskiewicz from MayTec, one of the team’s “R2D2” level-sponsors, and team dad Jon Snurka, whose son Brad (a senior at GHS) is in his 4th season as aRobovike.

Brad Snurka is the only 4-year team member and this year’s team captain, and has really enjoyed being on the team, finding it a great introduction to the STEM disciplines.  He said, “It was a good way to combine my programming hobby with building robots.  And the scholarships are really great, too.”  His job this year is to train other team members how to write code for the robot, and generally provide mentoring and leadership to the team. And he hopes to be the robot “driver” in the competitions this spring. Brad’s career goal is to teach high school physics, and he’ll be going to Northern Colorado this fall.

Alesa Laserna’s first choice for college is the Coast Guard Academy, where she wants to major in Biology.  Alesa is both a cheerleader and a member of the Robovikes team.  She joined last year to see if she liked it – and found that she loved it.  Learning about robotics, building the bot, and the team mentors are prominent in her reasons for being so enthused about the team.  She says, “It was a way to learn something new and have fun.  I like hands-on things, and this program really fits that.”

Brandon Elizondo is a senior and a 3rd year team member.  He’s going to the University of Colorado at Boulder to student physics, and would like to either be a researcher or professor.  He says that the robotics club has allowed him to meet a lot of people, and have a lot of fun.  Like Brad, he’s teaching new team members how to program.  He says, “We have a solid design, so we should do well at Regionals.”

Tom Miller is also a senior and 3rd year team member, and is a member of the build team.  He’s looking at a number of colleges, with Vanderbilt and Northwestern his top two choices.  Like a number of Robovikes over the years, he enjoys the sciences, but has interests outside of the STEM disciplines – in his case, particularly English.  But what Tom likes best about the Robovikes, “We’re all close – kind of a big family.”

The team’s web site – Robovikes.com [http://robovikes.com] – is filled with images and videos of previous teams, practices and game footage, as well as some basic information about the team and its sponsors.

The Robovikes will be competing at the:

About THE LABEL PRINTERS:

Today, the company has evolved into one of the 100 largest converters in the United States.  The Label Printers owns and operates two facilities in Aurora, Illinois, manufacturing and distributing labels and packaging products to thousands of customers in 25 countries around the world. The company’s quality systems are registered to ISO 9001 and are backed up by their 99.6% Quality Acceptance Rating.