On Friday 27 February 2015, Kurt Andersen was awarded the Danish Medal of Honour after 50 years of faithful service at Nilpeter, founded in 1919.
Kurt Andersen was born in 1949, and at the age of 15, he joined Nilpeter on 1st October 1964 in Slagelse for his apprenticeship in the machine shop. Five years later, he received his diploma as skilled machinist. 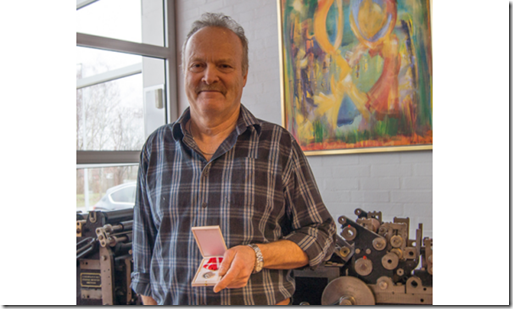 Kurt Andersen with the Royal Danish Medal of Honour, awarded to him after 50 years of faithful service at Nilpeter

In 1987, Nilpeter established a new assembly, and at the same time, a new service organisation was launched. Kurt Andersen was appointed head of service and fitting of Nilpeter presses worldwide. Thanks to his highly technical know-how and great communication skills, he still holds this position to this day.
Everyone at Nilpeter extend their warmest thanks and congratulations to Kurt for this well-deserved award.