RICOH INDUSTRIE FRANCE has been announced as the winner of the inaugural UPM Raflatac Label Life Awards. The awards recognise strong performance in responsibility and award a specific sustainability initiative. More than 70 of UPM Raflatac’s suppliers were eligible for the awards with 4 being invited to the finals at the UPM Raflatac Wrocław factory in Poland.

Following presentations from the four finalists, and intensive questioning from a panel of judges, Ricoh Industrie France (Ricoh) were selected as the winner for their commitment to biodiversity at their Colmar plant in North Eastern France. The Japanese owned business had developed a self-financing project titled ‘Vie et Couleurs’ (Life and Colours) which focused on habitat development and species conservation around the factory site, including planting natural wildflower meadows, establishing a wetland, a traditional apple species orchard, nest boxes and beehives. Employees, local residents and schools were involved in an on-going education programme on biodiversity and wider sustainability.

Elodie Heintzmann, Environment Manager for Ricoh Industrie France said: “We are delighted to be recognised for our actions. The event has been a huge learning experience for us – not only by participating but discovering how our peers in similar industries are tackling responsibility themselves. We will certainly be taking home a great number of ideas and hope to enter again in 2016!” 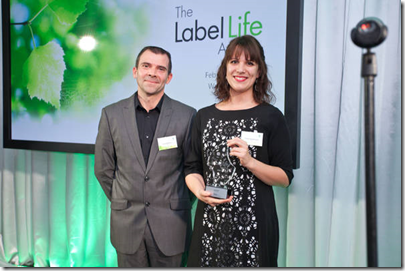 Ricoh Industrie France were selected as the winner of the Label Life Awards 2015. In the picture Franck Revillion and Elodie Heintzmann from Ricoh.

Jury member Piotr Nieznanski, Head of Conservation for WWF Poland commented: “I was delighted to be involved as a member of the jury in the awards. It is really important for business to engage seriously with responsibility and to go deeper than just words with clear strong actions. The finalists all showed their commitment to sustainability.”

UPM Raflatac Vice President of Sourcing, Sami Poukka comments further: “It is of strategic importance that UPM Raflatac retains responsibility expertise in-house. We work with a wide range of suppliers in order to deliver high quality products to the markets. Many of our suppliers have been working extremely hard to develop their responsibility actions. We felt it important to not only recognise this through the awards, but also to learn from their experience.”