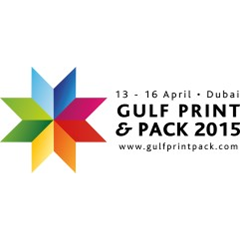 Gulf Print & Pack 2015 enjoyed its most successful edition to date as it closed its doors last week. As the Middle East region’s definitive platform for the commercial and package printing industry, 2015’s edition of the show posted a 26.7% rise in visitor numbers with a footfall of 11,918.

Running 13-16 April at Dubai’s World Trade Centre, its registration data shows that visitors came from an unprecedented 110 countries (93 in 2013, 83 in 2011 and 65 in 2009) underlining the show’s growing importance in the wider MENA region. Whilst the majority of visitors (both onsite and pre-registered) came from the UAE, the wider MENA regions also put forward good visitor figures; Saudi Arabia, Oman, Bahrain, Iran and Kuwait. The event also attracted high visitor levels from India, China and Pakistan.

Mike Simmonds, event manager at Gulf Print & Pack commented: “We are delighted with the amount of business conducted at Gulf Print & Pack 2015. The show has being gaining momentum every year and this edition has been the biggest and best ever to date. This year’s show was unquestionably upbeat and was a real buying show with many exhibitors selling everything on their stands! The exceptional level of business being done on the exhibition floor firmly positions Gulf Print & Pack as the region’s largest and most effective exhibition for commercial and packaging printers, brand owners and industry suppliers.”

Vedansh Gupta, Artica International DMCC: “Artica International DMCC, was pleased to launch itself at Gulf Print & Pack. Artica International deals in all kinds of papers, board and innovative packaging and printing substrates such as digitally printable wood and metallic sheets and boards. This year we generated over 150 leads from the MENA region. The prospective customers were amazed by seeing the applications of our amazing substrates, and we are sure it will keep them pondering. We are hopeful of being a part of the Gulf Print & Pack family and hope to see you in the next show! Cheers!”

Dirk Schroeder, Erhardt+Leimer: "On the whole, we were quite satisfied with the exhibition. People were especially interested in our web guiding systems and the comparatively new FE 52 color line sensor we had on exhibition. We had a significant number of visitors to our stand who asked our team for a demonstration of this sensor, and they all valued the fact that it's so easy to set it up. On the other hand, many of the visitors to our stand were looking for advice on web tension issues, revealing that even in this part of the world Erhardt+Leimer is known as a specialist in this field. However the best part of it was that we were able to generate several new leads and that some visitors even talked over bigger projects with us."

Elias El-Wadi, Gimpex for Paper and Board: “It was a positive event where we had many visits from our current customers and some new customers from the Gulf and MENA market. We even had a few suppliers visiting us and were able to get new sources of material. We feel Gulf Print & Pack is the small version of Drupa.”

Majdi Abdul Rahman, Gulf Commercial Group: “Gulf Print & Pack was a great opportunity for us at Gulf Commercial Group and our clients to demonstrate live different applications of the unique digital inkjet printing technology developed by RISO which combines speed, reliability and quality at controlled costs.”

Ashwin Satish Kumar, Henkel Dubai Silicon Oasis: “Henkel had a successful Gulf Print & Pack with many existing and new customers across a variety of industries visiting the Henkel stand to talk about Henkel adhesive technologies. These included a range of hotmelt and water based products for various post press, packaging, flexible and paper converting industries. The main attraction was the Aquence airfoam system which is the new generation of aerated adhesive technology launched by Henkel.”

Joelle Rayess, International Distribution Network (IDN): “Year round, the International Distribution Network (IDN) participates in a number of exhibitions across the Middle East to showcase the latest products from its high-end partnered brands: EIZO, Microtek, Shuttle, Epson and others. But never have we received such high ROI from an event before like we did from Gulf Print & Pack 2015. IDN launched two new brands at GPP: Alwan and Precisa for UAE. While day one saw a rather small number of visitors, we were overwhelmed by the increasing number of visitors that were genuinely interested in our products over the following days. In fact, the visitors we met were our exact target audience that gave us invaluable feedback for our products. We are glad to have participated at Gulf Print & Pack and will surely be there in 2017 too.”

Marinella Pinotti, ITALSTICK: “It is the first time we’ve taken part in Gulf Print & Pack and can confirm it is technically very effective. We are very satisfied by the number of visitors and the interest shown in our company and our products by show visitors. We had good meetings during the show and are now sending our best offers for the products requested: we have good expectations to develop business in the UAE area.”

Nigel Heaford, JM Heaford Ltd: “Gulf Print & Pack 2015 was a good opportunity for JM Heaford to meet existing customers from UAE and surrounding countries, we were also pleased to get enquiries from companies we had not met before moving in to the markets we serve and it was a well-attended exhibition. We continue to receive strong interest in our FTS model and in the developments throughout the product range JM Heaford has made to speed up, reduce operator in put while delivering a consistently high accuracy. Gulf Print & Pack is a show JM Heaford will continue attending.”

Komal Sharma, Kodak: “This year’s Gulf Print & Pack exhibition drew a larger faction of serious customers and decision makers, and this marks a definite step up for the event. In addition to the Gulf, we saw strong representation from Africa, as well as Turkey, India and Pakistan, and our channel partners welcomed the opportunity to interact with customers from these regions. Visitors of Kodak’s stand were thoroughly impressed with our roster of live demonstrations, especially the NEXPRESS Digital Production Color Press’ recently upgraded capability to support sheets up to one metre in length, and a live demonstration of the SONORA XP Process Free Plates on the TRENDSETTER 800 Quantum Platesetter. During the event, we also added on a new channel partner for the NEXPRESS Press to our UAE stronghold.”

Holly Poplawski, PC Industries: “Gulf Print & Pack 2015 was a great opportunity for PC Industries in collaboration with XOL Automation to showcase their offline print inspection and PDF proofing system, the Guardian OLP. The Guardian OLP compares customer approved PDFs to production proofs and press samples to help assure that the finished product is as accurate as possible. The system gained a lot of interest from potential customers with new applications that we’re seeing for the first time, but are a great fit for our system’s capabilities. In addition to the normal print and label inspection applications, the most interesting among the opportunities was for map inspection, which fits the Guardian OLP perfectly.”

Andreas Hoffmann, Primera Europe: “Gulf Print & Pack 2015 was a very successful show for us. The international show visitors were very interested in the different printing solutions Primera is offering. So we are expecting a great demand for our dry-toner and inkjet-based label printers in the United Arab Emirates and the neighboring countries.”

Jocelyne Hatem, Pro-Chem Trading: “Schmid Rhyner AG & its agent Pro-Chem Trading enjoyed interacting with a greater number of customers, printing houses, packaging producers and finishers. Next to our broad range of UV coatings, the team showed specialties like tactile effects, such as soft-touch, relief, microstructure and 3D-coatings that enable the packaging supply chain to differentiate their packaging design.”

Paulo Souto, SISTRADE: “In the MENA region, SISTRADE has a delegation in Abu Dhabi and partners in Dubai, Beirut, Tehran, Tunis and Casablanca, as well as customers in Lebanon and in Qatar. The participation in Gulf Print & Pack 2015 fair was a good time to show our customers our commitment through local support, as well as promote and strengthen the presence of Sistrade® MIS|ERP in the MENA region’s market. During this fair we presented the latest version of Sistrade® MIS|ERP with the features developed for packaging, flexible packaging and labels.”

Graham Harris, Tech-ni-Fold: “Exhibiting at Gulf Print & Pack for the very first time we were overwhelmed with the response we received over four incredible days. We sold all three of our digital creasing and micro-perforating machines after only two days and by the end of the show had received 151 serious leads as well as 18 distributorship requests. We came to educate visitors about the virtues of our rotary creasing technology and how we had adapted it to create three entry level digital creasing & perforating machines (The CreaseStream mini-series.) We had experienced success in Europe and USA, but didn’t expect to attract so much attention or sell any of our machines here, let alone all of them. It has been a fantastic experience.”

Seza Aslanian, Technochem Services: “We would like to thank the organizers for making Gulf Print & Pack 2015 an excellent show. This year’s show has generated over 170 new leads across the region and Africa. We debuted the Signature Sig Deli 600 tray former from Ace machinery Korea at this show. The interest in this machine has been incredible with five very serious sales deals in addition to having sold the machine on display. We also sold our Aniclean roller wash machine and have three orders confirmed at the show. Gulf Print & Pack has enabled us to make connections that would otherwise been impossible. Thank you for a successful show and we will be back in 2017 with a bigger exhibit.”