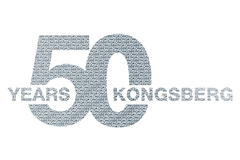 Esko (www.esko.com) is proud to announce the 50th anniversary of Esko Kongsberg, a milestone celebration for the company. Today, Esko Kongsberg is a world-leading manufacturer of digital finishing systems with many thousands of installations around the globe. Durability, reliability and precision have always been key values throughout its history. “Over the course of fifty years, we have accumulated strong skills, great know-how and excellent technology. This has enabled us to evolve from a manufacturer of drafting tables into a leading supplier of digital finishing systems,” says Emil Skarra, Managing Director Norway at Esko.

“Digital finishing is a vital part of Esko’s strategy, and Esko Kongsberg is key to our future success and that of our customers,” adds Udo Panenka, President of Esko. “Fifty years of constant innovation have provided us with a strong reputation and foundation. We have excellent technology and skills to help our customers take full advantage of the opportunities digital finishing offers in mainly the signage, display and packaging markets.”

In the early years, Kongsberg manufactured the first drafting tables used to produce test-parts and verify cutting programs for ship building. Soon the portfolio expanded to include equipment to engrave print clichés for map printing and then full-size designs for cars and trucks. In the 1980’s, the traditional Kongsberg drafting tables were used in both the sign and packaging markets. In the following years, the company changed owners through a series of acquisitions as it became part of well-known graphic arts companies: first Artios, followed by Barco which transformed in what is today known as Esko. “Our future as a market leader was sealed by the acquisition of the company in 2002 by Esko. Not only could we provide total solutions, but we could also rely on the strength of a global sales force and service network to take us into new markets and seize new opportunities,” Skarra comments. In 2011, Esko – including its Kongsberg operation – was acquired by Danaher, setting the stage for even more innovation in the future.

Today, Esko Kongsberg serves three primary markets: packaging, displays and signage. “We aim to make production as easy, efficient and productive as possible for our customers – starting at the early stages of structural design, right up through the finished product,” adds Tom Erik Naess, Esko’s Product Manager CAM. The current Kongsberg product portfolio ranges from the XE-series of small format table featuring accuracy and speed, to the XN-series for more versatility and robustness and the XP-series for productivity. Last additions to the Kongsberg family are the V-Series of tables for entry-level sign and sample making, and C-series for (very) wide format productivity.

A bright future ahead

The future of Esko Kongsberg looks bright, not in the least with the digital printing market continuing to flourish. “We increasingly see our digital finishing equipment being used for true production of finished products instead of just prototyping or sample making,” Panenka adds. “As a result, we are directing much of our research and development effort toward increasing productivity and industrialization with more automation, tighter linkage to software solutions, more industrial infrastructure (such as material handling) and integration with other machinery.”

“This year, we also started renovating our Kongsberg site and developing an Innovation Center to enable lean product development methodologies and processes driven by DBS (Danaher Business Systems). These will ensure customer-driven product design delivering the highest quality and performance by targeting the specific needs of our customers. For example, our new prototype center will allow us to utilize benchmark product development processes and methodologies as well as deliver rapid prototyping and enhanced testing,” concludes Panenka. “These are exciting times for the company and for our customers, and we are confidently looking forward to the next 50 years of Kongsberg innovation!”

Esko will be celebrating Kongsberg’s 50th anniversary at FESPA 2015, taking place in Köln (Germany) this year from May 18 to 22. Visitors to the show are invited to the Esko stand R50 in Hall 6 and join the company in celebrating this milestone festivity.

A high resolution JPEG of all Kongsberg 50 Years history images can be downloaded from an online image library at this link.

Esko is a global supplier of integrated solutions for the packaging and labels, sign and display, commercial printing and publishing industries. Esko products and services drive profitability in the packaging and printing supply chain by reducing time-to-market and raising productivity.

Enfocus, with its suite of automation solutions and PDF quality control tools for printers, publishers, and graphic designers, is part of Esko.

Esko employs around 1400 people worldwide. Its direct sales and service organization covers Europe, Middle East and Africa, the Americas and the Asia Pacific, Japan and China regions and is complemented by a network of distribution partners in more than 50 countries.

Esko is headquartered in Gent, Belgium, and has R&D and manufacturing facilities in five European countries, the United States, China and India. Esko is a Danaher company (www.danaher.com).