FINAT, the international association for the self-adhesive labelling industry, announces Helf Etiketten (Austria) and Bel Leerdammer Cheese (Belgium) are the winners of the second FINAT Recycling Awards Competition. Both winners were honoured during an awards ceremony at the recent European Label Forum in Amsterdam.

FINAT recycling consultant Jacques van Leeuwen chaired the jury, supported by Andreas Faul of INGEDE (Paper deinking industry) and Peter Sundt of EPRO (the European organisation of plastics recycling). "The second edition of our Recycling awards saw another strong field of contestants, with a number of returning participants putting in even stronger performances. We congratulate both winners and the other contenders with their accomplishments and look forward to the next edition of the FINAT recycling awards competition in 2016," commented Van Leeuwen.

The converter category saw a number of entries and the winner Helf Etiketten impressed the jury with the 100% liner recycling rate. The judges also commented on the sustainable ethos with the collection of liners from customers and the ongoing implementations of a complete management system. 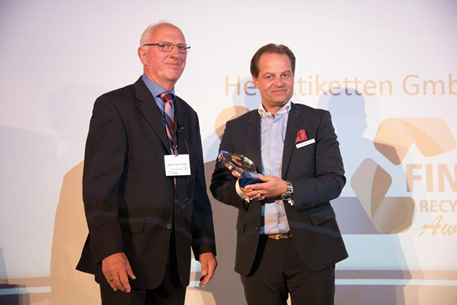 "In the hotly-contested converter category, the honours went to first-time participant Helf Etiketten with a particularly strong showing. The jury unanimously agreed that the maximum-capacity recycling of liner and the commitment of the company to communication on recycling internally and externally, backed up by press releases and newsletters, were exemplary. Combined with the great efforts by the company to reduce matrix waste and to trace the secondary material, the jury was happy to give the award to Helf Etiketten,” Van Leeuwen details.

In the end-user category Bel Leerdammer Cheese stood out for building on ongoing efforts through developing successful pilots in 2013 and recycling 100% of paper liners in 2014. It also incorporated recycling into its operation wide quality system and strengthened internal and external communication regarding its release liner recycling efforts. 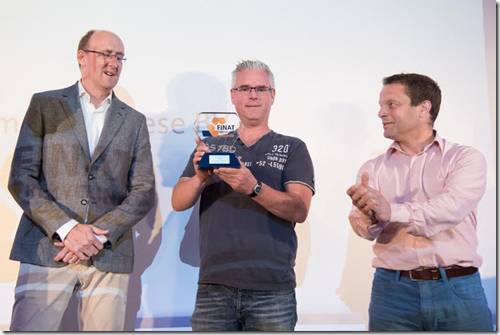 “While the number of entries in the end-user category was markedly lower than in the converter category, the jury was convinced by Bel Leerdammer Cheese strong entry and in particular by its strong strides forward since 2014. Not only did the company more than triple the tonnage of its recycled paper liner compared to the previous year, it also included release liner recycling as part of a certified quality system and stepped up its communication efforts,” explains Van Leeuwen.

The FINAT Recycling Awards Competition recognises companies that have their paper and/or film release liners recycled. The goal is to raise awareness for the growing number of sustainable and economically-viable recycling programmes. These offer companies site-specific solutions for the collection and recycling of used release liners, allowing them to reduce both their carbon footprint and landfilling costs.

For more information, visit the FINAT recycling portal at Finat.com/en/Sustainability/Recycling-Portal