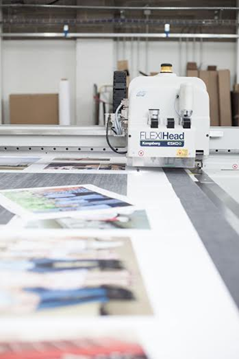 James Lawrence-Jones, Group Technical Innovation Director of PhotoBox, expects last year’s record canvas volumes produced in one single day will be broken, as a result of the streamlined production enabled by the Esko solutions. “We broke the record at peak season, and I am confident that this year, with our newly streamlined and automated operation, we will beat it again,” he says. “We expect to continue to see increasing demand for our canvas products as customer desire to personalize their homes continues to grow, and having the best-of-breed solutions, automated workflow and a very robust cutting solution will help us not only cope with the increasing demand but ensure we maintain our best of breed next day turnaround service levels and excellent product quality.”

The need for a new cutting table was initiated by PhotoBox’s investment in a fleet of Epson 60-inch wide-format printers. “We needed a cutting solution for the wider canvas media produced on these printers,” Lawrence-Jones explains. “We were also seeking ways to streamline the entire printing and cutting workflow for canvasses to accommodate increased print capacity. Whilst the process of manual cutting, by hand or with trimmers, was not a bottleneck, it did have associated labor costs. We were also keen to improve the accuracy of our cutting.”

Prior to the investment, Lawrence-Jones carefully reviewed a range of cutting tables from a variety of brands, weighing speeds, quality, performance and costs. He says: “We have other cutting tables across the group but this is our first Esko Kongsberg in the UK. As we were in need for a cutting solution that delivers the highest performance for the wider canvas media, the Kongsberg XN22 was simply the best choice, because of its superior quality, durability and Esko’s service support.”

Since its installation, the Kongsberg table has been busy at PhotoBox. “One of the things I really appreciate about the table is its ease of use,” says Lawrence-Jones. “You don’t need an IT person to interact with the system. It is easy to run and understand with an intuitive and very visual operator interface. And its advanced capabilities and multi cutter head will also allow us to use new media and materials, further expanding our range of offerings.”

The acquisition of Esko’s Automation Engine was not part of the original investment; but after detailed consultation with the Esko team, Lawrence-Jones was impressed with its potential impact. “Over the past 15 years, we have developed our own production systems in-house,” he details. “Our canvas operation offers considerable opportunity for an automated production workflow, which Esko Automation Engine has helped us achieve in a very short period of time. Automation Engine has delivered many benefits, including the ability to control production remotely, which has been highly valuable during recent peak seasons. Automation Engine also allows us to create separate high and low season workflows so that we are optimizing our production during both busier and quieter times.”

Lawrence-Jones admits that the initial focus was on improving productivity, but says, “To date, we are probably only using 20-30% of the potential functionality of Esko Automation Engine. We expect to find many more ways to make our operation more efficient using the full capabilities of the solution, including export and import of XML files, error reporting and status reporting as well as remote access and scalability. And I’m convinced there will be even more to discover as we delve deeper into Automation Engine’s broad range of capabilities.”

He continues, “The implementation is for now limited to canvas, but we see the potential Automation Engine has regarding imposition nesting, generation of cutting files and handling other grades of canvas. It could also be used to generate print-and-cut files for use in other production areas and factories across the group. The future value will be to extend the benefits of automation even deeper into the organization, including areas where we produce other wide-format multi-image cut files.”

As for the business impact, Lawrence-Jones comments, “PhotoBox faces unique production challenges, with every item it produces being personalized for individual customers. Our challenge and one of our greatest successes has been in our ability to industrialize ‘series of 1’ production processes. Optimizing production costs in this environment relies on industrialisation solutions supporting this variability and in the case of the Esko hardware and software actually increasing flexibility and scope for customization and individually tailored output. We believe the combination of the Kongsberg XN22 and Automation Engine will open up new markets and enable our company to automate other elements of production beyond the canvas division.”

PhotoBox’s relationship with Esko was crucial to the decision process for the investments Lawrence-Jones concludes: “The Esko team’s level of product knowledge is very high and inspires a great deal of confidence. Their support, training and subsequent technical assistance have been exactly what was required. We are constantly learning more about our new capabilities, enabling us to look more broadly at challenges we face. We have already significantly improved productivity and believe we will continue doing so as we learn more, especially on larger runs of set sizes as well as being cost effective with more complex cuts.”

PhotoBox is the first of its kind, leading the revolution that allows customers to turn their digital photos into a wide array of physical and emotive products. Created in the year 2000 with the target of providing a high quality online digital photo printing service at an affordable price, PhotoBox quickly became the market leader in this space and cemented its place as the number 1 photo printing service in Europe when it merged with French counterpart Photoways in 2006. After the 2006 merger, PhotoBox accelerated its expansion into the personalised products market with the development of its market-leading range of photo books, a way for customers to create photo albums online that are printed in single units, quality-bound and delivered right to their door. PhotoBox now has a range of over 600 products, propelling the company to become the number 1 personalisation business in Europe, operating in 19 countries throughout Europe and has recently expanded operations into Canada, Australia and New Zealand. PhotoBox is part of the PhotoBox Group, parent of the PhotoBox, Moonpig, PaperShaker, Sticky9 and Hofmann brands. For more information about PhotoBox, please visit www.photobox.co.uk. For more information about the PhotoBox Group, please visit group.photobox.com.