FINAT, Europe’s leading trade association for the self-adhesive labelling and adjacent narrow web converting industry, is delighted that Past President Kurt Walker’s dedication and commitment to the label industry was recognised with the R. Stanton Avery Lifetime Achievement Award at last night’s 2015 Label Industry Global Awards. Sponsored by Avery Dennison, the R. Stanton Avery Lifetime Achievement Award, is presented to those that have made a substantial and key contribution to the label industry over a minimum of 25 years. 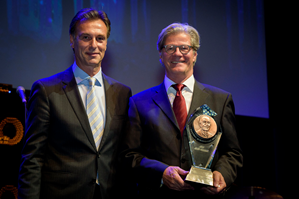 “Kurt Walker was the unanimous choice of the judging panel. His impressive long-term industry pedigree as CEO of tesa Bandfix, as well as terms as Treasurer, Vice-President and President of FINAT, made him the stand-out choice for this year’s Lifetime Achievement Award,” commented chair of the judges, Mike Fairley. Known for being innovative and forward thinking, Walker has been influential in unifying the wider global label industry. A significant supporter of the L7 – now L9 – Walker has also been instrumental in helping grow the alliance’s profile and importance.

“Kurt has played an important role at FINAT, and has been a driving force in engaging the label community worldwide and connecting people. He laid the foundations for the association’s repositioning as the leading network and resource for business leaders in the European label community. He also was a strong advocate of FINAT’s role in stimulating environmentally sustainable practice in the label industry, especially where it concerns the adoption of recycling solutions,” adds Jules Lejeune, Managing Director of FINAT. “We are delighted his efforts, knowledge and experience in the label industry have been recognized and awarded. It is truly well deserved!”

After achieving a university degree in chemistry and business administration, Walker entered the printing industry where he has held various positions in sales and marketing. In 1988 he joined the label industry and acted until his retirement in 2012 as CEO of tesa Bandfix AG, the Switzerland-based business which manufactures self-adhesive decorative and design labels. Under Kurt’s successful management, tesa Bandfix (later Bandfix) became one of the most prominent and innovative label companies in Europe.

Kurt’s FINAT ‘career’ dates back to 1989, when he attended his first FINAT meeting. In 2007, he joined the FINAT Board, and a year later became the association’s Treasurer. In 2009 he was elected Vice- President, before being appointed President in 2011. “I was always interested in what happens outside my own business world, so being part of an association seemed a natural and easy way for me to make contacts with my industry peers and to access relevant market information,” comments Walker.

When asked about what have been his most rewarding achievements with FINAT, Walker says: “Linking the international label industry and defining the new position of FINAT in Europe were for me the biggest challenges. The transformation of the annual FINAT congress from a social business event to ‘The European Label Forum’ (ELF) will certainly help to strengthen FINAT’s position as the umbrella organisation for the European Label industry. I’m enchanted to have been involved in that process.”

Leading FINAT in the age of transformation

Kurt stepped down from his Presidency of FINAT at this year’s ELF after leading the association for four years, making him one of the longest serving of all FINAT Presidents. Taking over the Presidency is Thomas Hagmaier. Thomas is the second generation in charge of the almost 70-year old family company Hagmaier Etiketten. Having successfully led the company for years with his brother Werner, Thomas became the sole owner in 2012. Thomas joined the FINAT Board in 2006, after having been a member of the Marketing Committee since 2004. In 2009, he joined the FINAT Membership Committee before being elected the association’s Vice-President in 2011.

“For the optimal ‘out of the box’ view of the label business, I soon found that FINAT was the right route to take, and I subsequently decided that active work in the committees would be the best way to gain a deeper knowledge of the industry and expand connections in many sectors,” comments Hagmaier.

Leading FINAT over the next years, Hagmaier has set clear goals for his Presidency in order to help the label community answer current and future industry challenges: “Label, packaging and product decoration are our love. FINAT must remain the European platform to support this vibrant product base with a platform of meetings, education, trend watching and statistics. My vision is to wake up and motivate a lot more converters to join our forum, so that many more companies volunteer for the FINAT committees, explore with others the future of our products and help to shape our industry.”