Esko reports that Russian repro house ReproPark builds on the full range of Esko digital flexo solutions to spur revenue growth, deliver outstanding plate quality and maintain its leadership position. Founded in 2006 and operating out of five locations across Russia, the company produces 70% of the country’s flexographic printing plates. A clear industry leader, ReproPark serves more than 750 companies in 100 cities. Since its start, ReproPark invested in an impressive number of Esko equipment and technologies. “Having the latest and best technologies in house is vital to guarantee our customers the optimum results they expect from us. We look at many factors to select equipment but for us, Esko’s solutions for flexographic printing are the best available on the market today because of the efficiency, productivity, cost saving and quality benefits they offer,” states ReproPark’s COO Vitaly Kovardakov. 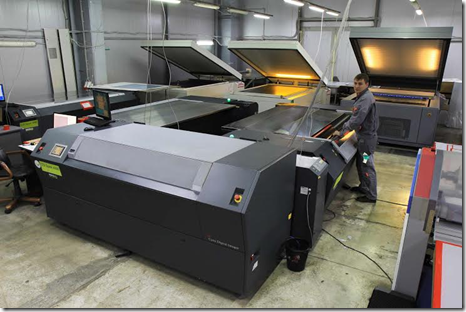 “Even during turbulent economic times such as those we are facing, we have never shied away from investments in the latest technologies to ensure the best product quality at optimum cost,” says Kovardakov and continues “These investments, especially our Esko solutions, enable us to produce high quality flexo plates more cost effectively than a printing house could do internally. Even those having their own equipment often turn to us when quality requirements are especially high.”

ReproPark today has a remarkable machinery park of nine Esko CDI plate imagers – including two Esko CDI 5080 HD Flexo units that were the first in Russia – and produces more than 70.000m² of plates annually. “We started as a small company producing about 200m² per month,” says Kovardakov. “And today, we are the largest producer of photopolymeric plates in Russia and the owner of the most advanced technologies in the area. That has allowed us to outpace many older companies and, in fact, acquire a number of them. This resulted in an amazing growth in a very short time period as well as a great team of specialists that work hard to serve our customers’ needs.”

ReproPark’s investments extend beyond the CDI machines. “We turned to Esko as another market leader to not only have the best flexo plate imaging in the market, but to ensure that our operation was as efficient as possible,” Kovardakov explains. “Esko’s Automation Engine and packaging prepress editors for Mac and PC – ArtPro and PackEdge respectively – are critical to achieving that goal. And we recently replaced our RIP with Esko Imaging Engine, an integrated set of prepress production tools. RIP time for complex files is reduced from 30 to 40 minutes down to about five minutes, a time saving that is huge for us considering the volumes we produce.”

ReproPark also has two Kongsberg cutting tables, an XN22 and an XN44 along with Esko’s Digital Flexo Suite (DFS) – this is unique for a repro center in Russia so far. “This was an important step in our company development, and it brought us considerable economic benefits,” Kovardakov comments. “Both cutting tables now work in parallel, which allows streaming of tasks for compound plate labeling, cutting and assembly. We use the layout mode in Automation Engine and DFS functionality to ensure optimum use of plate material, placing necessary data directly on the plate layouts. That significantly simplifies the operator’s work, making it more precise and replacing our former, somewhat error-prone and time-consuming, manual process.”

Kovardakov and his team continue to keep their eye on the future. “We work closely with Esko and share our feedback to help making the solutions even more efficient in the future,” he says. “Our close relationship with Esko is one of the factors that ensure our continued growth at twice the rate of the economy. I envision the ReproPark of the future as functioning like a single, well-oiled machine that produces ideal products without any manual intervention. And I truly believe that Esko is the partner that will help us get there.”