In all 40 international branches of the hubergroup, employees celebrated the 250-year anniversary of this global printing ink manufacturer on Tuesday, 29th September 2015. This day is the officially registered formation date of the Munich-based company that still remains under the same family's ownership. Management staff members of the hubergroup thanked their colleagues during this celebration for their unfailing support and commitment. "Without you, the success of the last two and a half centuries simply would not have been possible," was the message that the regional managers gave to their staff members on behalf of Ulla Borgmann, member of the hubergroup Management. In her welcome speech, she recalled the company's founding years, challenging periods, and the expansive development in the last few decades, entertaining everyone along the way with a few anecdotes. 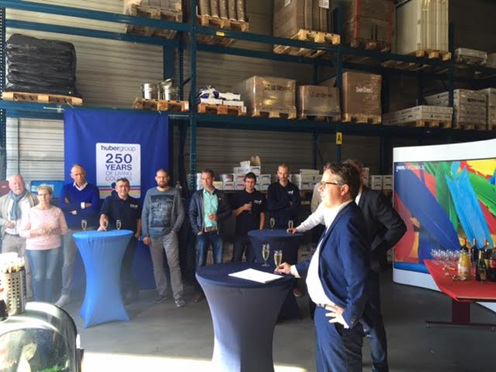 The festivities for the approximately 3,500 employees varied in line with the respective local company size and regional traditions for celebrations. Some international offices incorporated Bavarian themes into their party decorations to reflect the traditions of the parent company. Large tents were erected in Munich and Celle where about 1,000 German employees came together for the remainder of the day to celebrate, having finished work at 1pm. They enjoyed an international buffet accompanied by musical entertainment, and spent the afternoon socialising and having fun.