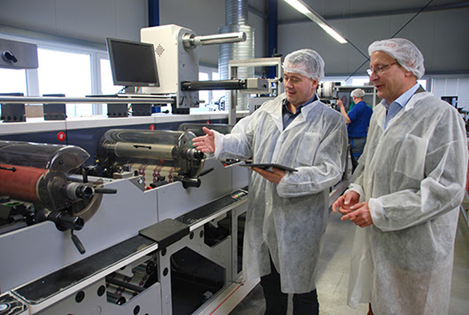 Following the installation of a classic FA-Line, a new 10-colour FA-4* flexo press was delivered and taken into operation at Clever Etiketten GmbH in Leipzig in February 2015. According to Clever’s Managing Director Jens Ellrich, the new press is predominantly used for jobs, where high quality is required.
When planning the recent investment, two properties were essential: The printing quality and the possibilities for fast job changes. These two aspects range high on the Clever agenda, since a majority of the job runs range from 20,000 to 100,000 running meters - and counting.
Servo technology replaces mechanics
To this end, features like the CLEANINKING system, the fast tool change, the sleeve technology, and a very short web path on the FA-4* design, proved to be especially advantageous. Not only are the setup times reduced, but the amount of waste is also lowered. Another major plus is that settings, performed mechanically with traditional printing presses, are done by servo-motors. This means that all parameters of a given job may be stored in the system, allowing for automatic pre-setting of the press, when the job is recalled.
Fine tonal gradations in flexography
For CEO Jens Ellrich, an important criterion, when producing high quality labels, is primarily the reproduction of fine tonal gradations. Especially the labels, which Clever produces for the health care sector, include images in delicate colours and soft gradations on a frequent basis. For this reason, consistent tests were carried out on various flexographic presses from different manufacturers, before the decision to invest was taken.
Clever’s printing tests on the FA-4* confirm an outstanding reproduction of halftones. This fact, combined with the general profile of the new press investment profile, was ultimately the decisive factor for choosing the FA-4*. As a result, three of the five presses at Clever are now Nilpeter presses.
The printing plates play an important role for the printing quality in flexographic printing, which is why the Clever Group has chosen to establish its own cliché production, thereby pooling know-how and technology for prepress and platemaking at the same location to benefit from advantages in terms of quality as well as effectiveness.
A fully loaded press
The configuration of the new Nilpeter 420 mm, 10-colour flexo press is comprehensive. The press is equipped with a screen cassette for printing of opaque white and special effects, and with cold foil stamping and lamination for value-added printing. The production of multi-layer, self-adhesive labels with inline printing of front and back is made possible by a cross-over unit.
The FA-4* is also the first Nilpeter press to support operator control by remote tablets. The ACS system (Air Control Satellite) for wireless press operation gives the printer more liberty, since the operation is no longer bound to a PMC. The menu for the control has been designed so that the handling is as intuitive as possible.
Production completely converted to low migration inks
Clever’s customer base spreads across different market segments. One of the more important segments stem from the food industry, which is why, three years ago, the entire plant was converted to a production based on low migration inks, even though these are not required for all their printing jobs. Notably, for applications for pasteurized foods, the company has developed a label solution, which is now patented: A label undergoing a colour change when the pasteurization is complete. This label will be printed on the new FA-4*.